I asked her to narrate what was going on, which wasn’t exactly a natural thing to do, but created exactly the kind of environment rich with comprehension that I needed in an otherwise incomprehensible immersion setting. She also made more natural adjustments like placing pauses between phrases, and speaking slowly. Even when some madrileños (i.e those living in Madrid) switched to English, my wife repeated what they said to me. For those paying attention, it showed them that I COULD understand, just with some assistance. This makes sense to me because most people—in any country—aren’t “sympathetic to the language learner” like a teacher must be, and usually just speak loudly at the person who doesn’t seem to understand, or begin using the language they think is native. I persisted many times even though we noticed certain people switch to English when they detected an accent.

Notes on High-Frequency
I have already written about how context affects what is actually “high-frequency,” and I saw this play out on my Madrid trip, firsthand.

Although I seldom use pronouns in the classroom a) in order to shelter vocabulary (e.g. just use the noun, place or person’s name!), and b) because they aren’t really needed in narratives, I was surprised to find how useful they were in the context of my trip! When asking about a specific concept for which I didn’t have the word, este (= this) was my friend. Of course, there are other forms of that word, which I surely used in a non-native way (that some would call “incorrect,” but should stop doing so), but the meaning behind my message was always clear, be it este, esto, or eso. I know that the same message could be expressed non-verbally with a gesture, but using just the one word, este, helped me feel good about interacting in the culture. Low proficiency but high confidence makes for a great time! If my experience were a class, I’d continue.

BTW, I saw a LOT of tourists with their affective filters waaaaaay up. One even turned to me while ordering red wine, questioning herself (i.e. “it’s rojo, right?”), which is an adjective I’m positive she heard hundreds of times in high school Spanish. Oh, and everyone in Madrid used tinto for red wine, not rojo, but the latter gets the point across.

Also, past tense was really important (e.g. I just saw/heard/thought…) to share my experience, but it was clear that I hadn’t heard those first person past tense forms enough. This reminds me of how important it is to include dialogues in TPRS class stories, as well as share/narrate what you, the teacher, are doing at any particular moment. Students need to hear these forms, which are really just separate words in our mental representation anyway, and there’s no reason to delay them (re: unsheltering grammar). Blaine Ray and Bill VanPatten mentioned how important it is to expose students to forms other than 3rd person singular just last week.

I learned that the word pincho was important, though I don’t remember it from any novels I’ve read. Not using that word resulted in large portions, and less tummy room for tapas. I also forgot to use the word chupito, which resulted in a full glass of ierbas, the ubiquitous bitters-like regional digestive, and a minor resaca (= hangover) the next morning. Ooooh, Spain.

Here are some of my experiences I recorded on Facebook, which could be used as presentational writing samples for what is my likely proficiency level of Novice High, or Intermediate Low: 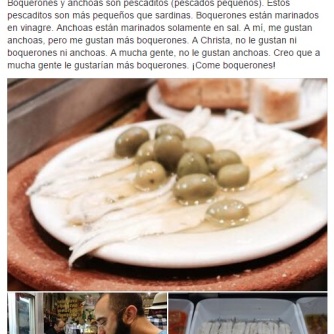 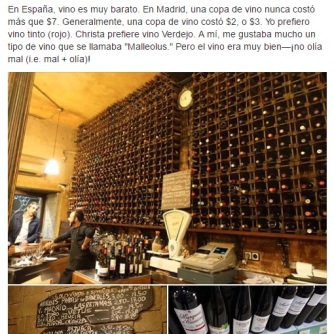 3 thoughts on “An American [Language Teacher] in Madrid”