My new room down the hall is just about set up. I’ve kept things from last year that really helped, ditched things that didn’t, and introduced some new things I felt I was missing.

Taking a cue from the diversity-positive practices Anna Gilcher and Rachelle Adams shared at NTPRS a couple years ago, I now have a bunch of qualities at the ready. I’m looking forward to having deeper characteristics other than the baaaaaasic small animal that’s smart and pretty. We can do better than that, right? So, the next time we ask develop a character, either by itself during One Word Image (OWI), or in a story via Teaching Proficiency through Reading and Storytelling (TPRS), I’ll ask if they’re sociable, or quiet…honest, or curious…observant, or courageous, etc. Here are my quālitātēs:

Next to the quālitātēs is the Word Wall that I’ll be building from scratch, which has different paper panels for each class section (this year named after the 4 chariot racing factions, The Whites, The Reds, The Greens, The Blues).

The rejoinders & interjections underneath will be added as shown, but only after we’ve used them for a bit.From this view, you can also see the rules at the front that have worked oh so well since Bob Patrick shared the idea of DEA years ago.

New this year is a small list of Super Clear Classroom Cognates generated from the growing list that anyone can contribute to. They’re mostly there to remind me that I can use these words when fishing for details or asking an either/or without adding as much cognitive demand otherwise using words with no apparent connection to anything meaningful.

Beyond that is the TPR Wall, which is back from a short hiatus, and now with words I KNOW I’ll be using for some sweet 3 Ring Circus, and novel chain commands. The best part is that I don’t have to think much…most of these are ready to be combined. 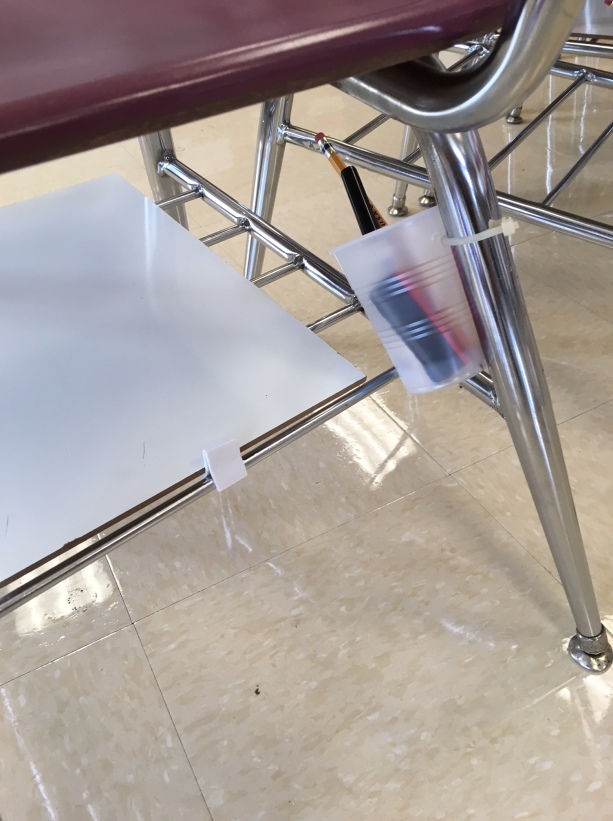 Here’s an idea that I got when hanging up my [drum]stick bag on a bookshelf at home. Each one of these cups holds a pencil, a dry erase marker, and an eraser. Everything learners need is right there, and the Classroom Manager’s student job is to make sure these are filled before class is over. Also, the book racks underneath were a little steep, so I put mounting tape on the back to keep the whiteboards from sliding off. 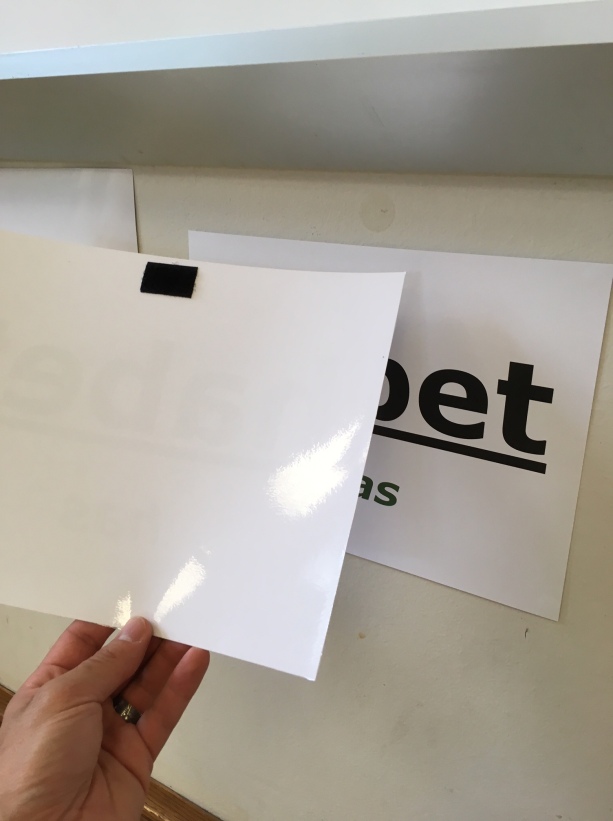 Also new are some handy Velcro buttons (that clear circle on the wall) that easily peel off surfaces for reuse. I now have all the posters I can hand out as student jobs right where I need them. This was icing, for sure, but I like how it works out, a lot! 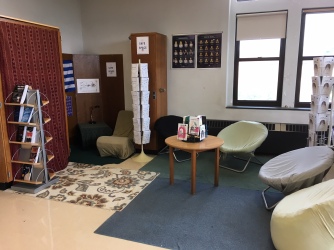 Last but not least, the Free Voluntary Reading (FVR) area will be used 2x/wk once we have about 10 class stories, with the simplest novellas and reading options available soon following.