I live by the “low-prep/no-prep” mantra. Yes, there’s life outside of school (maybe not if you teach high school ELA, sorry folks), and I enjoy sharing with others ideas on how to regain their personal life back while also being a damn fine teacher. As part of this, I pride myself on having not taken home student work for a few years now.

This first week, however, is different…

I’ve been used to starting the year with a half-day devoted to essential rules, some routines, and that school-required housekeeping stuff. Then, in next 8-10 class days over about 2 weeks, I would get into Circling with Balls (CWB), Total Physical Response (TPR), Discipulus Illustris, not to mention the No-Travel Story Script I was looking forward to trying out. Not this year. I see my students just 1 hour per week, which means those usual beginning activities would take us up through Thanksgiving! That’s simply too slow for he brain craving novelty. Expectations must be lowered. I’m just now recognizing exactly how much lower, too. This first week—one class—had to combine all that housekeeping with only a little bit of Latin…very little. You know what we did? placet (= likes). Yep, that’s it, at least as the only verb, although eī, tibi, -ne?, an, nōn, et, harpastum, minimē, and certē also made appearances. The focus was on just one student, and another parallel student to compare.

I was stunned by how little we did, and the fact that the day represented 1/4 of those students’ Latin classes for the month of September was unsettling. Even now as I type this I’m strategizing. In fact, that’s why I’m typing this. As I mentioned in my last post, I consult this blog often…it’s not just for other readers!

Considering how infrequently we meet, there will be less time for uptake as we begin reading. My students probably heard placet 20 times (= good), but will read it an entire week later (= bad). This year, I don’t have the luxury of the consistency that comes from meeting daily. As a result, I need to make the input that students read hyper-comprehensible.

I have in my hand 25 CWB sheets each with a student’s name, preferred name, and 0 to 4 drawings of what they like or like to do. The 0 isn’t a problem. In fact, that mystery might elicit MORE conversation than talking about the obvious horse some kid drew. I also have some free time. Similar to what John Piazza typed up last year after the first weeks of school, I’ve done the same using mostly placet, establishing meaning with English and pictures.* The result reminds me of a video I’ve seen with students reading Chinese characters with images spliced into the text (Terry Waltz StarTalk?). Throughout the process, I learned some names, and matched faces to PowerTeacher photos. THIS is the first day of my first week prep, and the pay off will be well-worth it.

In the text below (click for Google Doc), there are 18 unique words, and ~216 total words in length. There are many names in that total word count, but they are all embedded within the Latin as part of the message, so I’m not being picky about that figure. Overall, that’s not too shabby for what amounted to probably 20min. of completely interrupted Latin input. In class, students were exposed to 6 of the words, which do occur most frequently in the text. Meaning is established with English for another 4 words, and with pictures* for 8. 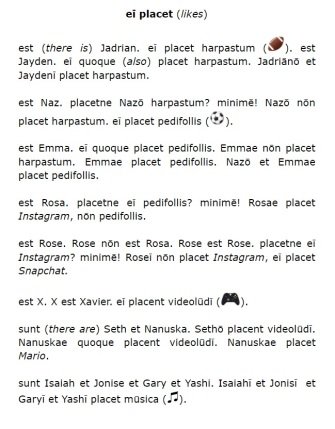 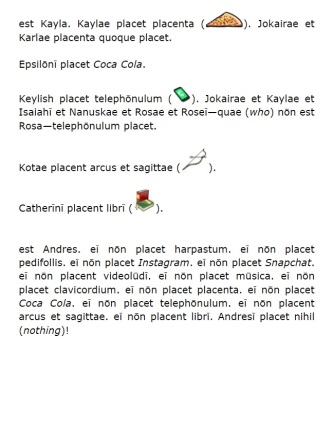 Next class—in a week—I will read this aloud to students as they follow along on the projector board. I do not anticipate any difficulty in understanding this text. I’m not confident that would be the case if I were to assign this for reading at home. The pictures help us learn more about each other than just the harpastum used in class, but I wouldn’t want to risk frustration after the first class of the year!

*I haven’t been keen on using images to establish meaning when English is available, yet I found the page too cluttered with the meaning of all 8 interests established in parenthesis. Since I’ll read this aloud to students, I will have the opportunity to [re]establish meaning using English if anything is unclear.