Familiarize yourself with Bob Patrick’s One Word At a Time Stories (OWATS), here.

Sure, this activity can be used to deliver understandable messages when asking questions to each group and/or providing Pop-Up Grammar explanations. Realize, though, that the more groups you have, the less CI you can deliver; time is divided between groups students instead of all at once in a whole-class format. Aside from the main purpose of providing some limited CI, OWATS is also suitable when you need a break from delivering CI. I was in that kind of state of mind today, and didn’t ask groups many questions. Still, the students had a blast creating stories together.

I didn’t plan ahead of time for today’s OWATS, but quickly realized upon entering the building that after the long weekend (including a surreal night at Hôtel de Glace), I didn’t have the energy to sustain a full day in Spanish (n.b. we start Latin in February, then French in April for this 7th grade Exploratory Language course). Teachers new to CI, and Latin teachers new to speaking Latin will likely find themselves in a similar boat. OWATS is a good option. I always have phrases we’ve used typed up, cut out, and ready to go, and continue to add more to the pile as we go…

My OWATS
The only change I’ve made to Bob Patrick’s OWATS is that now I keep the words at the front of the room and let students get new ones at their own pace. What do I do if not checking each sentence and distributing new words to groups? I constantly move from group to group to monitor progress, act as cheerleader, and engage them in some questions about their story. Why the update? I’ve found that groups wait too long for me to finish working with another group. This bogs down the pace to an unworkable level with less-proficient students on the verge of losing focus. The focus and proficiency in upper level classes is totally different, so my adaptation might not be necessary in your case. 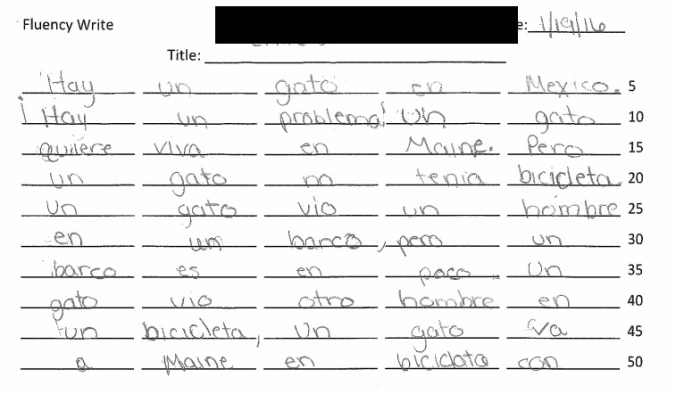 Here’s a group that did quite well. Don’t worry about those errors. With so few hours of CI, there’s no point in making a single error correction. The story is quite understandable, but not all of the Spanish is their own. Although it’s tempting to use this as evidence of acquisition/progress, the bulk of the writing was from the following OWATS phrases:

Still, they provided me (us) with another possible form of input if I were to edit and use their personalized story for a follow-up activity. 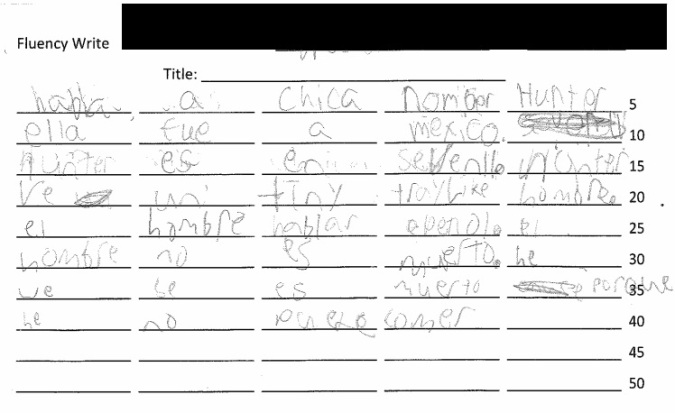 The example above is from a group with low proficiency. English abounds, we have no plot/conflict, and there’s less continuity throughout. One of the challenges with OWATS is writing a line or two in order to set up the new phrase. This group didn’t do that, and instead tried to string together each of the phrases they drew from the pile one-by-one.

I’m not surprised by any of this. Ability to write in a second language after ~22 hours is limited, and when students work together there’s more uncertainty thrown into the mix. This is why the products from Novice level OWATS must be heavily edited, or used as a means to get more Input from the teacher during discussion. On a day when that teacher has low energy, there’s not a great deal of CI going on. Interesting to note, however, that students aren’t really aware of this, and quite enjoy themselves during OWATS. This is one of those activities that gives students the impression that they’re learning, which helps create buy-in for our programs.

What Next?
After today’s OWATS, I ditched the phrases that seemed to hinder the flow of writing (e.g. “I am not,” or “you are” in a mix of otherwise 3rd person forms). Now, instead of editing and typing these up for some kind of reading activity like I usually do, I’ll instead use them for a Dictation activity later this week. I’ll make edits on the fly just before reading aloud the next line. I’ll use the OWATS product, but not spend so much time creating materials. Teachers have lives, too.

Unexpected Idea from Students
One group of students misinterpreted the OWATS directions and actually each took turns writing a single phrase of the story after they drew “was in” from the pile (e.g. The man, was in, Mexico, he was, a small man, he wanted, cheese, a lot of cheese, etc.). This had a “campfire” storytelling feel to it, and actually engaged everyone more equitably. The limited Output seemed more manageable, just like our one to two word responses during class. I noticed that only a couple students were participating during OWATS, but then magically everyone appeared to be involved once I made my way to their group. That might be unavoidable; these are kids. Other than creating smaller groups, this new idea might be another way to include more students by design. Try this variation when you do this activity again. One Word At a Time Campfire Stories (OWATCS)? j/k

Here’s a link to the paper I use for story writing in class.

2 thoughts on “OWATS: CI not Guaranteed”