I’ve used DEA as anywhere from 0% (i.e. just rules) to 100% of a student’s grade, including a sliding scale throughout the year. While a few have referred to DEA as a “behavior system,” I prefer to look at it as habits that promote an ideal environment for input and interaction. Whatever you want to call it, students who do DEA, or DEA-like things acquire language (adjusting for neuro-diversity, of course), and those who don’t, make it harder for themselves and/or others. Some schools forbid grading behavior altogether, others report them as “Life Skills,” etc. Still, others implement elaborate behavior systems more closely tied to discipline, etc.

My school has implemented a streamlined version of their behavior system. If you’re wondering why it exists in the first place, there’s good reason. Some of our students had never done a homework assignment in middle school (eso si que es), yet they are all college-bound, so we need to support them. For me, DEA is just rules this year, but many of the behaviors in the streamlined behavior system address my version of DEA (i.e Look, Listen, Ask). As such I’ve decided to begin class with another Call/Response routine (popular this year). Now, this is the kind of thing I would typically do in English, like giving instructions, but it’s just another opportunity for more input using common words, while at the same time supporting students with a school policy: 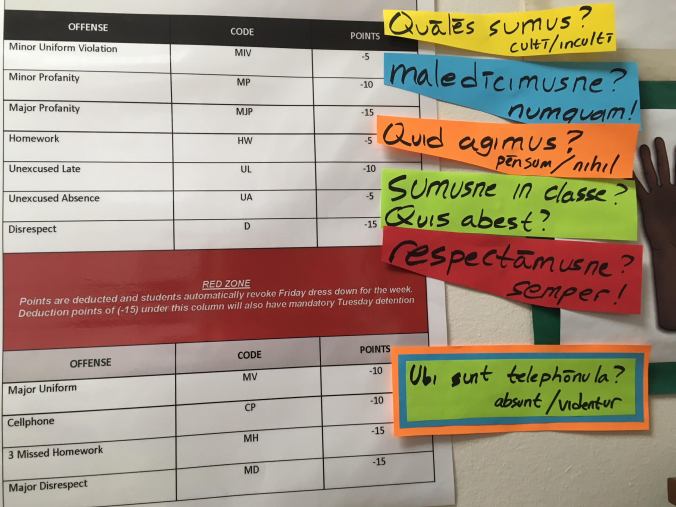 Of the 18 words used, the only new ones are cultī, incultī, maledīcere, numquam, and pēnsum. If this were a text, there would be too many new words for students to read it easily, but it’s a routine we’ll repeat each class/week (i.e. class meets 1x/wk), so students will be exposed to these new words over time. Also, there’s some decent grammar in there, meaning we teach it, just not explicitly. I see 3rd person singular, the less-common 1st person plural, 3rd person plural, a passive verb, adjectives, nouns (including neuter plural), adverbs, ablative case, and the accusative case.

Not only is this routine to remind students of their updated behavior system, but it’s also a time for me to check things that I otherwise can’t even put mental energy towards (e.g. a kid isn’t wearing a tie), as well as a possible opportunity for Personalized Questions & Answers (PQA), which easily could be used for that one thing you need to get going. In fact, I’ve been doing Chris Stolz’ daily routine which includes looking into who’s absent. In this new routine of mine, there’s the benefit of noting who’s present as well as who might be coming in late (another thing that’s usually last on my mind as I begin interacting with students). We’ve made it fun, too, like when I ask the first question, any student particularly proud of what they’re wearing stands up and we talk a little bit about it. Input and interaction for the win!

So, do you have any school-wide systems you could capitalize on while enforcing school policies and promoting the culture?