I recently updated the Universal Language Curriculum (ULC) to include ongoing Class Days and Culture Days. This provides more of a balance to the year without the previous “Unit 1/Unit 2” structure that each lasted approximately an entire semester. I also made sure to list independent reading as a key component. Yeah, I obviously have a stake in whether teachers build class libraries and include my books, but the whole reason I got into writing novellas in the first place is because I bought into the idea of independent reading tenfold…

END_OF_DOCUMENT_TOKEN_TO_BE_REPLACED

Modern and classical language teachers alike have been using big name textbooks for decades, yet there’s been an emerging counter culture known broadly as “untextbooking.” This movement is a response to a) the lack of proficiency, b) dropping interest/enrollment, and c) the kind of exclusivity that form-based textbook teaching has an affect on. Instead, preference within the “untextbooking” movement is given to meaning-based teaching that results in greater proficiency, higher enrollment, and a removal of obstacles, making language programs more inclusive. For years now, I’ve heard things like “there’s not enough culture,” or “this lacks curriculum support,” or some other complaint suggesting that textbooks have something necessary to offer that not-textbooks don’t. It’s been shown that textbooks can overload learners with too much vocab, grammar rules, and target-culture details (in English). However, I’m more interested in the role of proficiency. That is, for all the supplements textbooks might bring to the curriculum, what do they really do for language proficiency? Where does proficiency come into play in a curriculum?

END_OF_DOCUMENT_TOKEN_TO_BE_REPLACED

Let’s face it; most school-wide PD is trash. Either only one content area greatly benefits, or in an effort to get every department on the same page the facilitators end up wasting everyone’s time altogether.

END_OF_DOCUMENT_TOKEN_TO_BE_REPLACED

Even a teacher who’s been in the classroom for 6 years has only started the school year a maximum of 6 times, and there’s a good chance that none of those years began the same way. That’s not a lot of practice!

As annual amnesia sets in, I do a LOT more scripting, thinking, planning, confusing, etc. all at the start of the year. If Kids lose knowledge after 3 months; teachers lose flow. In fact, I just posted a video to the Latin Best Practices Facebook group sharing how I ended up stuck one day during some Total Physical Response (TPR) I’ve been using as brain breaks. Naturally, I’m more aware of my teaching since there hasn’t been enough time for anything to stack up, so I’ve been thinking about the start to this year… END_OF_DOCUMENT_TOKEN_TO_BE_REPLACED

This year, I’ll be teaching 4 sections of Latin 1 filled with brand new high school freshpeople. My first of 2 broad units in the Universal Language Curriculum (ULC) is based on the questions “Who am I?” and “Who are we?” Since the first day of school is one of those adjusted schedules so every section meets, I have a PPT about myself using lots of cognates, and forms of just 1 verb, “to be,” as a way to introduce the course, as well as begin connecting with students.

After the section about me, I show a few pics of our school, a few of the city, and then they get a sneak peak at the Unit 2 Essential Q, “Who were the Romans?” then go back to the familiar with a slide including 4 things I like in the corners. This segues into Card Talk so I get a little bit of data in order to type up, talk about, and read their interests on the first full day. I probably won’t hand out the syllabus until the end of the first full class, too, even though other teachers might do so during this first orientation day. Here are screenshots from that PPT: 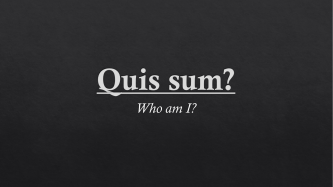 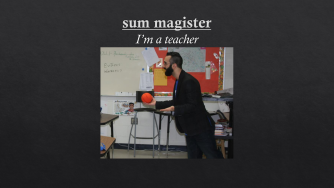 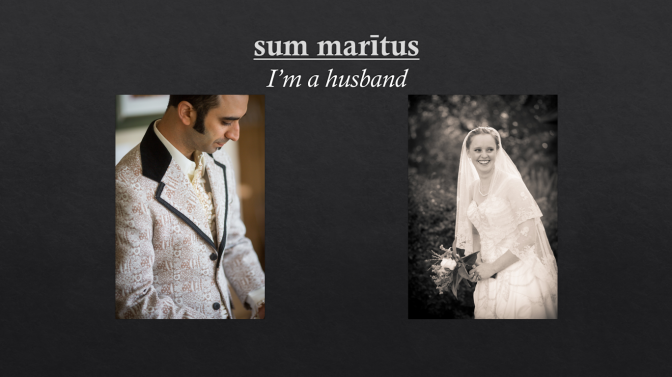 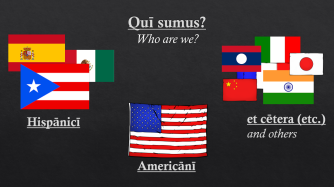 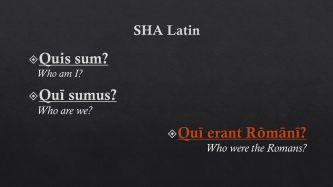 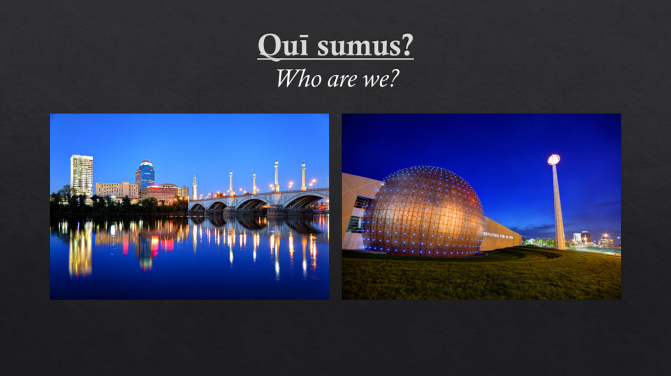 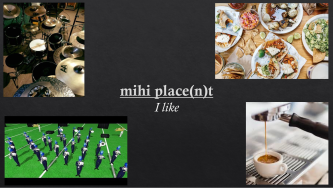 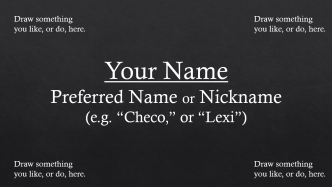 Unless you’re an island of one, a program Mission & Vision is a good idea to keep the department heading in a similar direction, even if things don’t start out that way. I put a lot of time into crafting the document last spring, and just had some help from my admin for the final touches. Once that was squared away this week, I could hand in my 2018-19 Syllabus. Let’s unpack all that…

END_OF_DOCUMENT_TOKEN_TO_BE_REPLACED

All Of My Daily Activities, etc.
– input-based strategies & activities

If this stuff interests you, consider putting a few things in place to support the move towards a more comprehension-based and communicative approach. Here are the practices fundamental to my teaching, making the daily stuff possible:

Continue reading for explanations of each…

END_OF_DOCUMENT_TOKEN_TO_BE_REPLACED

When choosing the class agenda beyond the Talk & Read format, it dawned on me years ago that I couldn’t remember all my favorite activities. Thus, here are the input-based strategies & activities I’ve collected, all in one place, and that I currently use (see older ones above). Everything is organized by pre-, dum-, and post- timing. You won’t find prep-intensive activities here beyond typing, copying, and cutting paper. Oh, and for ways to get that one text to start, try here. Enjoy!

**N.B. Any activity with the word “translation” in it means translating what is already understood. This should NOT be confused with the more conventional practice of translating in order to understand.**

END_OF_DOCUMENT_TOKEN_TO_BE_REPLACED

I recently updated my classroom posters as part of the Universal Language Curriculum (ULC). I now intend to focus more deliberately on those top 16 verbs each year, every year, using whatever else is needed for communication given various topics.

Here’s the next update…Super Posters! 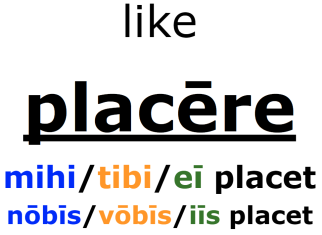 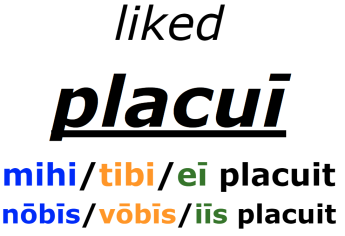 These new posters not only have all the plural forms, but also the past tense on the back when printed double-sided! Now, I use the past tense aaaaaaaaall the time, right from the first day of Latin 1! In fact, there’s no legitimate reason not to when teaching in a comprehension-based communicative classroom (i.e. shelter vocabulary, not grammar). Usually, my signal for past tense (i.e. hand over shoulder) is enough to convey the meaning, but these new Super Posters will be particularly helpful when there’s a completely different-looking word (i.e. stem-change). My signal works, but there are those who would prefer to have the plural forms written as well. As such, I’ve added them as another set of posters, present tense, and plural. However, these words get quite long for a highly inflected language like Latin, so I won’t be using them, myself. 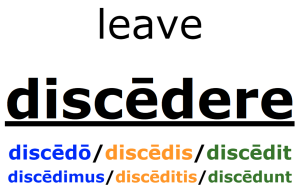 The plural forms of this word are quite long, and harder to see from the back of the room.

Due to that clutter from some verbs, my own plan is to continue posting the original ones with only singular. So, where do the Super Posters come into play? They’ve now become the laminated ones I hand out to students. In addition to holding up the poster when I use that verb, the student can flip it when they hear the past tense. Also, I can use one of these as-needed instead of writing any form students don’t understand.

I hope you find a use for these Super Posters, too!

N.B. Latin has a few past tenses. The most frequently used one, the perfect tense, has a completed aspect (like the Spanish preterite). The imperfect tense, with a continuous aspect, is used all the time, too. I chose mostly the perfect forms, especially since those can be completely different-looking from the present forms. Still, there are a few words I use mostly in the imperfect, so I included “erat” instead of “fuit,” and “sciēbat” instead of “scīvit.” If you want different tenses of any of these, make a copy of the Google doc and edit as you see fit. After all, these posters are to help YOU make Latin more comprehensible, and that might vary across different contexts. 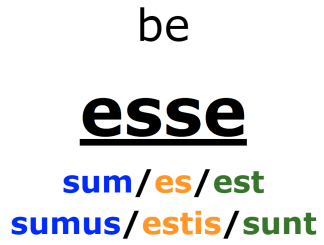 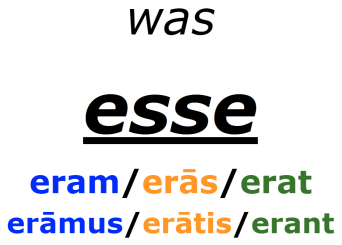 I’ve just decided to drop Obligation from the Awesome Octō (i.e. is, has, wants, likes, goes + says, thinks, ), and replace it with Knowledge (i.e. knows/doesn’t know). Here are all the posters.

This is the first step towards updating and embracing the Sweet Sēdecim (+ sees, hears, comes, leaves, brings, puts, gives, is able) that many successful language teachers have been using for quite some time. The result will be focusing on a slightly larger core vocabulary—instead of just the top 8—over a longer period of time. These top 16 naturally occur across many communicative contexts. Thus, the Universal Language Curriculum (ULC) is born.

In a nutshell, though…

Unit 2 Content, Varies each year (ACTFL’s Communication, Cultures, and Comparisons)
“Who were the target language speakers?”